What to See: Windsor Castle

Windsor Castle is the largest inhabited castle in the world, and the oldest in continuous occupation (over 900 years). It is one of the Queen’s three official residences, and is often said to be her favourite. She spends most of her private weekends at Windsor. The Royal Standard flies over the Round Tower of Windsor Castle when the Queen is in residence – at other times, the Union Jack flag flies in its place.

Samuel Pepys proclaimed the Castle to be “the most romantique castle that is in the world”. That was in 1666, and the same is still true today. A “Must Visit” destination.   [ BOOK TICKETS ]

The origins of Windsor were in the 7th century Saxon settlement of Windlesora, where the present day village of Old Windsor is located. The town of Windsor is correctly known as “New Windsor” – the word “new” being used in a strictly relative sense!

Windsor Castle was first built by William the Conqueror, following his invasion of England in 1066. The original structure was built from timber with earth fortifications. The Castle held an obvious strategic position on a steep hill overlooking the River Thames, and was part of a ring of castles around London, with the Tower of London, one day’s march away, at its heart.

The Castle was later rebuilt in stone, and grew in importance over the years. Henry II constructed the Round Tower and the original stone outer wall. Following the English Civil War, the Castle’s primary role became that of a royal palace. The Castle has remained largely unchanged since the early nineteenth century, apart from the restoration work following the fire (see below).
[ BOOK TICKETS ]

The Fire at Windsor Castle

The Fire of Windsor Castle took place on 20 November 1992 – ironically the 45th wedding anniversary of the Queen and the Duke of Edinburgh. During work on some of the State Rooms in the castle, a fire broke out in the north-east part of the Castle and rapidly spread to engulf many rooms.

Fortunately most treasures and works of art had been removed temporarily and so few items were lost, although over 100 rooms in the Castle were badly damaged or destroyed. The fire took 250 firefighters some 15 hours to extinguish. The Castle was renovated, the aim being to restore the damaged rooms to their former glory using authentic materials and craftsmanship, and was re-opened in 1997 after five years of work. The cost of the renovation was £37 million. More on Wikipedia.

Windsor Castle is much larger than most people realise (more than 12 acres), and it is worth allowing a good two hours for your visit. The Castle is open every day except Garter Day (One day in June every year), Easter, Christmas, and one or two other days during the year. Opening times and access may be restricted at certain times of the year due to state functions. For accurate information telephone +44 (0)1753 831118

Where to Buy Windsor Castle Tickets 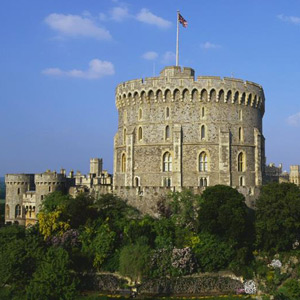 Tickets are reduced in price when the State Apartments are closed

Admission to the Castle is free to residents of the Royal Borough of Windsor and Maidenhead with an Advantage Card.

The Castle is open during the following times:

As Windsor Castle is a working royal palace, sometimes the entire Castle or the State Apartments within the Castle need to be closed at short notice.​​

St George’s Chapel is open for visitors from 23 July on Monday, Thursday, Friday and Saturday.

from 23 July – Evening Prayer (without music for the time being) at 5.15pm seven days a week.

St. George’s Chapel is usually closed to visitors on Sundays as services are held throughout the day. Worshippers are welcome to attend the services at:

As a working royal palace, the Castle is used frequently by The Queen for State ceremonies and official entertaining, and closures can occasionally occur at short notice.

Please check opening arrangements by visiting this website or telephoning the Ticket Sales and Information Office on +44 (0)303 123 7304.

Changing of the Guard

** Due to the corona virus outbreak the Changing of the Guard at Windsor Castle is suspended.**

The Windsor Castle Guard still change, but the handover takes place inside the Guardroom and there will be no Band or ceremony to watch

The Changing of the Guard is one of the highlights of a visit to Windsor. A band usually accompanies the Guards, although this is subject to weather conditions.

The Guard March takes place all year round, dependant on the weather. The Guards march on alternate days from August to March and daily during April, May, June and July, but never on a Sunday. The schedule (see final paragraph) is set by the British Army and is subject to change.

To watch the new Guards march up the High Street you need to be positioned in the High Street at 10.50am. Once inside the Castle, the Guards change outside the Guardroom in the Lower Ward at 11.00am. The sentries are changed throughout the day. The old Guards then march back to the barracks at about 11.25am.

Please note that traffic is stopped when the guards make their way between the barracks on Sheet Street, along the High Street and into the Castle. Traffic Wardens and Police control traffic on the following approaches to the centre of town: Thames Street, the junction of Victoria Street and Sheet Street and near the junction of Frances Road and Sheet Street. Traffic is usually stopped between 10.45am and 11am (as the guards march to the Castle) and between 11.15am and 11.30am (as they return to the Barracks).

The ceremony usually takes place at 11:00 on Mondays, Wednesdays, Fridays and Saturdays, but the schedule can change, check the British Army website for details. The guards march through Windsor town into the Castle, where the guard change takes place.

Changing of the Guard does not take place on Sunday

Provisional Schedule (please note that this schedule is set by the British Army and is subject to change).

The Castle is a pleasure to walk around. As you proceed through the various wards and terraces, you will have excellent views of the Round Tower, of the various fortifications, and of the surrounding countryside, including Eton and the River Thames.

The magnificent and beautiful St George’s Chapel was started in 1475 by Edward IV and was completed fifty years later by Henry VIII. It ranks among the finest examples of late medieval architecture (perpendicular gothic) in the UK. Ten monarchs are buried in the Chapel, including Henry VIII with his wife Jane Seymour. The Chapel is the Chapel of the Most Noble Order of the Garter, Britain’s highest Order of Chivalry. The Order was founded by Edward III in 1348 and the Garter Knights are selected by the Queen. The Ceremony of the Garter takes place on 14th June 1999, and is attended by the Garter Knights, the Queen and members of the Royal Family.

The State Apartments at Windsor Castle

The State Apartments are lavishly decorated formal rooms still used for state and official functions. The treasures in the Apartments include works of art by Canaletto, Holbein, Leonardo da Vinci, Rembrandt, Rubens and Van Dyck, as well as the ceilings and woodwork of the rooms themselves. Also on display is a large collection of armour, including an etched gold suit of armour made for prince Hal. 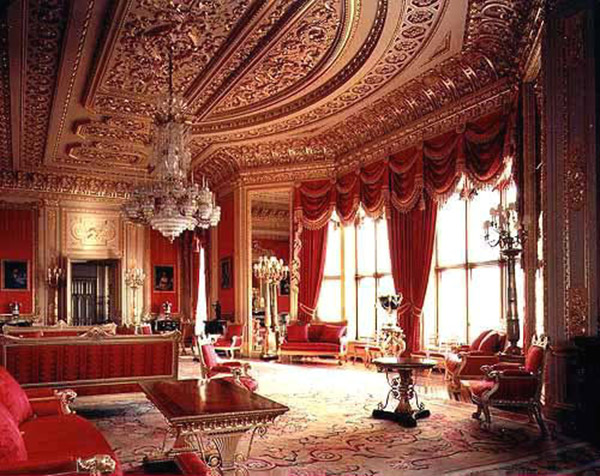 Queen Mary’s Dolls’ House is an amazing dolls’ house built on a scale of 1 to 12. It contains working lifts, running water and electricity, and took 1500 craftsmen three years to complete.

The idea of creating a dolls’ house for the Queen was that of the King’s cousin, Princess Marie Louise.

After returning home from a visit to the King and Queen at Windsor Castle, during which they had shown her much kindness, Princess Marie Louise found her mother and her sister assembling a collection of miniature furniture for Queen Mary.

Queen Mary was known as a collector of miniature objects including Fabergé animals, children’s silver furniture and other examples of ‘tiny craft’. This gave Princess Marie Louise an idea. She announced to her family that she would commission a dolls’ house as a present for the Queen…